FOCUS – Grenoble Museum presents its new temporary exhibition From nature, until March 19, 2023. An opportunity to bring together four contemporary artists who have not exhibited together before: Wolfgang Laib, Philippe Kogne, Giuseppe Penone and Cristina Iglesias. All present an artistic vision of nature, a theme that goes back to the earliest hours of human creation.

At a time when activists throw mashed potatoes or soup over works of art in the name of protecting the environment, the Grenoble Museum presents a major exhibition on “. From nature “. A title that clearly states the subject. But who, using the determiner ” of “, while at the same time emphasizing the bias that will be treated with it.

It is indeed four contemporary artists’ vision of nature that forms the soul of the museum’s new destination. The artists who have been the subject of the exhibition in the last twenty years are: German Wolfgang Laib (in 2008), Nantes-based Philippe Cognée (in 2012), Italian Giuseppe Penone (in 2014) and Spanish Christina Iglesias (in. 2016).

From nature… and from the artist

The Grenoble Museum invites its visitors once again to an exhibition focused on contemporary art. Nevertheless, reminds its director Guy Tosatto, nature is a subject ” eternal, even eternal “. From cave paintings to the most recent creations, it is indeed omnipresent in human creation, sometimes integrated with it, sometimes removed from it.

If nature is at the center of environmental problems, Guy Tosatto invites us not to limit our reading of the exhibition to just this question: “ Artists take us to another, perhaps even more important, dimension. This common destiny we share with the universe around us. This transcendent view of nature is a dream and a source of nourishment, both material and spiritual. »

Transcendence really lives in the creativity of the exhibition from nature, Artists across styles and disciplines were brought together for the first time in an exhibition. Even if a course marks the boundary between each of the universes.

Philippe Cognée among flowers and sandcastles

front door”From nature”, it is Philippe Cognée, the only artist in the exhibition to have several rooms dedicated to him, who holds it for visitors. This choice may come as a surprise at first glance, as the Nantes native is known for depicting cityscapes using beeswax, a technique that gives his paintings a unique impression of vibrancy and ‘stillness’. 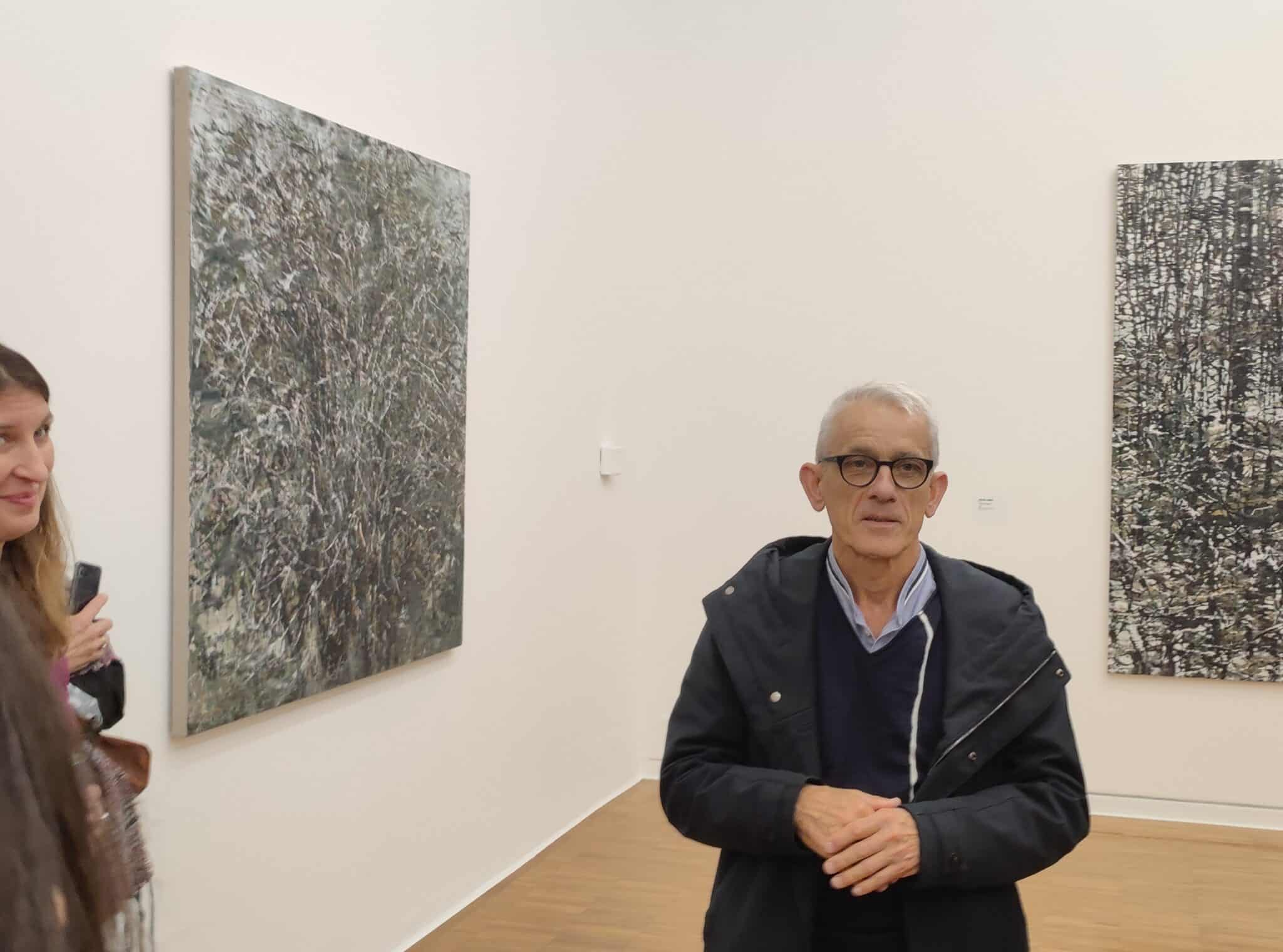 However, Philippe Cognée also knows how to represent nature, as evidenced by the huge flowers that open the exhibition. Work on photographs is another creative method of the artist giving new life to faded flowers. And whose tormented forms and more or less vivid colors can induce the final slumber… like the crushing of his flesh.

Philippe Cognée also depicts green or snowy landscapes, sometimes marked by influences from Ben, where the artist spent his childhood, or a chance to capture a picture from a train window. Not to mention a number Sand castle” metaphors of our civilizations on shaky foundations, slowly carried away by water and wind “, describes the Grenoble Museum.

From Wolfgang Laib to Cristina Iglesia

Wolfgang Laib’s universe, in turn, unfolds in a visible simplicity around the paintings, which are almost invisible against the white background that the artist invites. to cross the river » (Cross the river), whom ” strive for purity “. In the middle of the room dedicated to him is a two-tone black egg-shaped mass with a hood In Brahman refers to ” youth of the world », according to Sophie Bernard, chief curator responsible for modern and contemporary art. 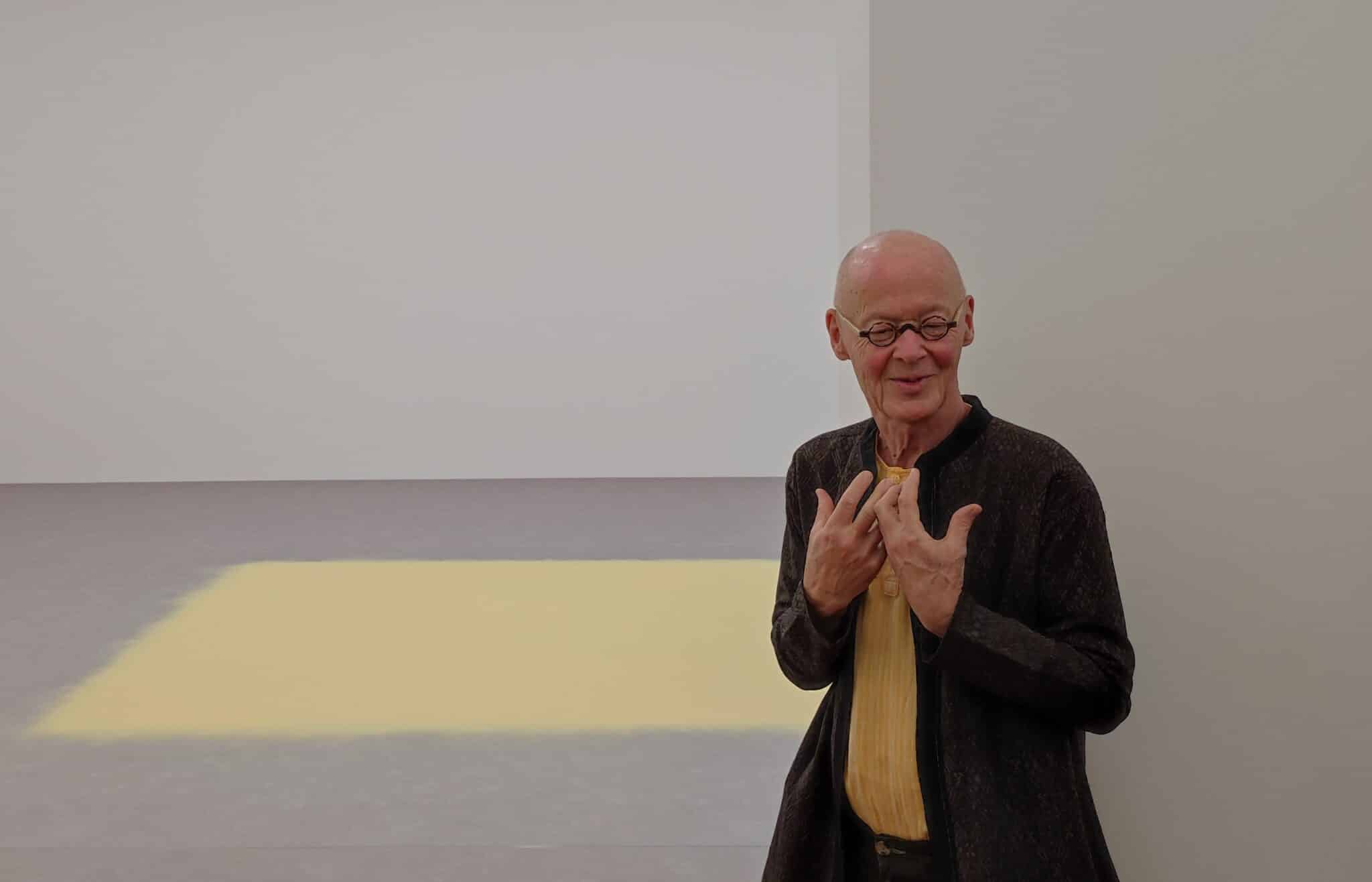 But Wolfgang Laib also exhibits one of his famous ” pollen squares “, is an achievement that spans the life and career of the artist. Pollens, like other elements, really radiate this former doctor’s creation. ” No matter how old it is, pollen will continue to make squares, says Wolfgang Laib. “Sophie Bernard recalls. Which emphasizes the influence of eastern culture and meditation in the creator’s work.

Cristina Iglesias, for her part, is exhibiting an original work for the De la nature exhibition. And even ” the temple Laughs Guy Tosatto, who was almost overwhelmed by the scale of the Spanish sculptor’s work, which was still in the process of installation a few hours before the opening. 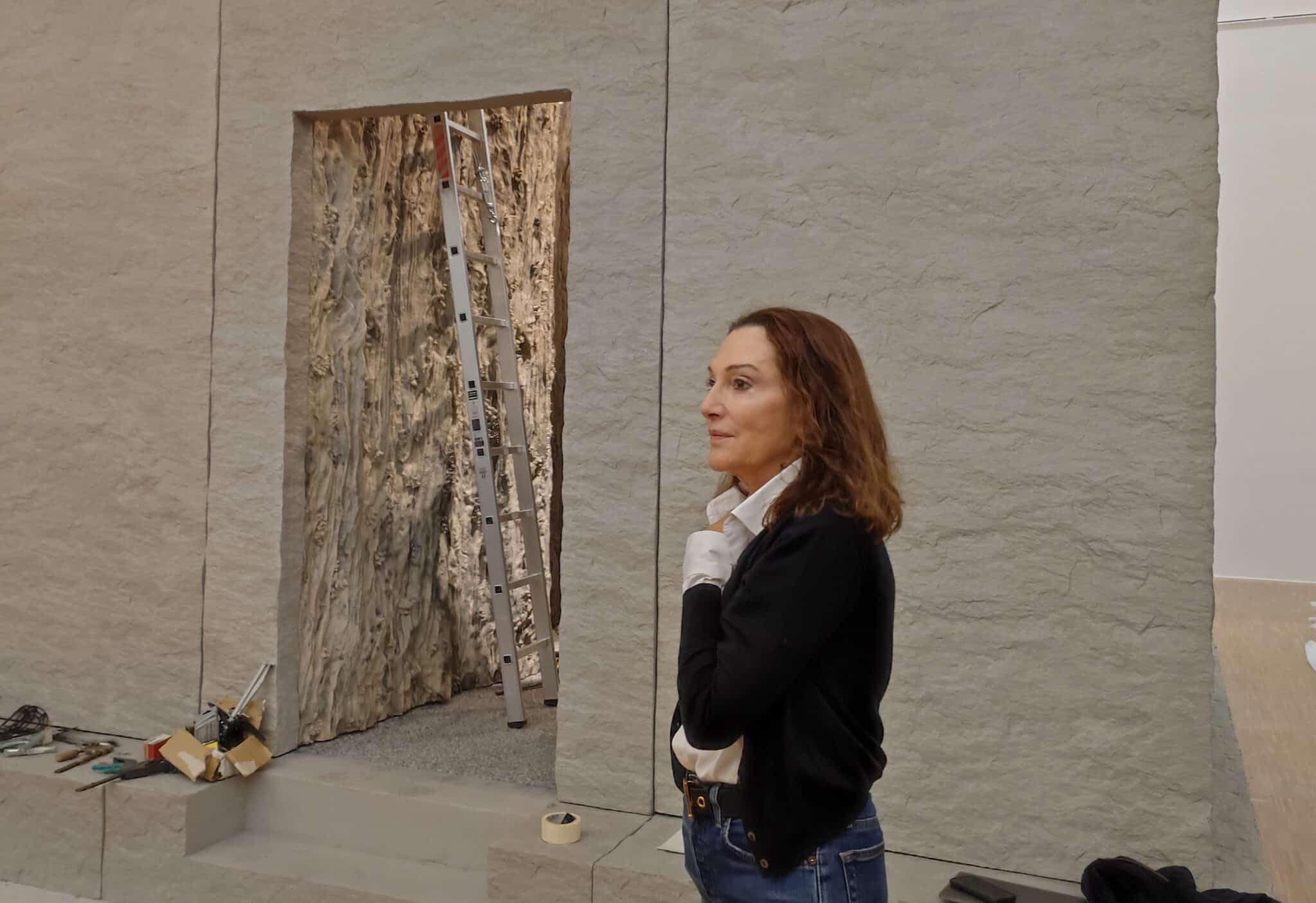 Her name ? Moist mineral chamber. A creation that visitors can enter. The opportunity to discover it a strange and hidden room, both mineral and oozing with humidity, architecture and primitive organism, paradoxical, where trompe-l’oeil is an invitation to a journey addressed to the soul. “, describes the Grenoble Museum. All this is accompanied by the artist’s works on copper, also unpublished.

Giuseppe Penone and his “forest spirits”

The exhibition finally concludes with a large room dedicated to Giuseppe Penone. Big “paintings” on the wall, his Verde del bosco, show traces of tree bark made of chlorophyll. The result is dreamy depictions of forests in paradoxical harmonious disorder, sometimes disturbed by a subtle human presence through fabric or a piece of clothing. 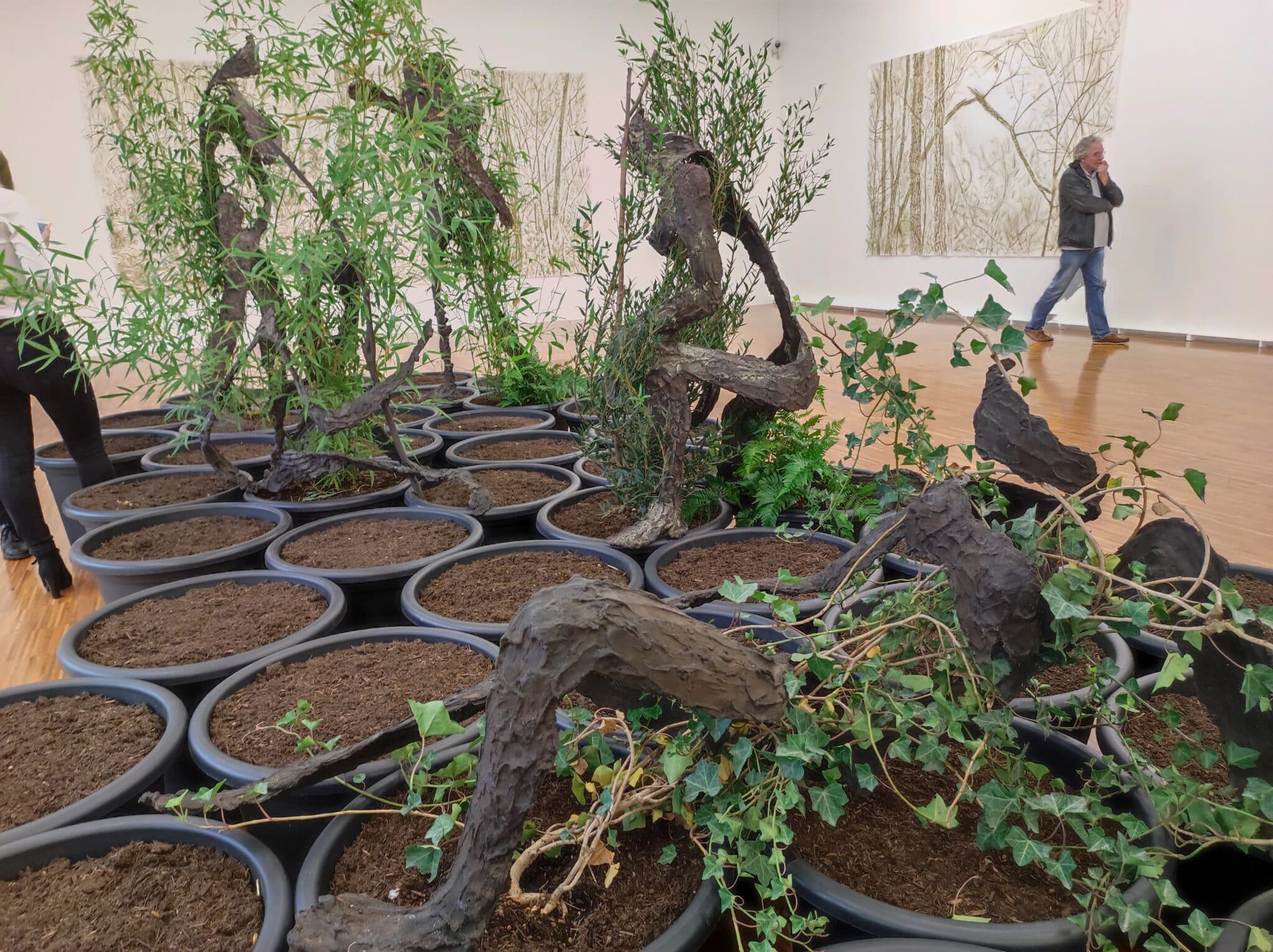 Answer to these works Gesti vegetali, molten and agonized sculptures emerging from earthen pots amidst the (timid) vegetation. In the dynamism of forms, these ” forest spirits » It gives the impression of trying to rise towards the sky, which is the natural desire of most plants, even to leave the state of being human.

we will understand From nature While this question certainly arises for artists and visitors alike, it is not part of a single political or environmental challenge. But it follows through the four senses the contemplative or mystical approaches of nature as a source of inspiration, imagination, or creative energy. Exhibition on view (and review) until March 19, 2023.