The Xgimi Halo+ isn’t just another cheap portable mini projector. Its elegant and discreet design is combined with an amazingly good image. This little gem is bright for its size, offers decent contrast, fairly accurate colors, and the Android TV ecosystem is well integrated. There is even a battery with a declared autonomy of 2.5 hours of reading content.

However, it’s a bit more expensive and is easily outclassed by larger, conventional projectors that don’t have a battery, like the Optoma HD29He. So if you don’t need completely wireless movie nights, you can get a better picture and save money by choosing another option.

On the other hand, if you’re looking for a portable home theater experience, the Halo Plus delivers a better and brighter image than many competing projectors. The simplicity of the built-in Android TV interface and its myriad of streaming options make it much easier to use than many models we like. But it comes at a high price.

The Halo+ is a 1080p projector, but accepts 4K and HDR signals. Like most projectors, it won’t do much with HDR, but this feature is still a good option. There is no lens shift or zoom, which is typical for this type of portable device. Move the projector away from the screen to get a larger image. 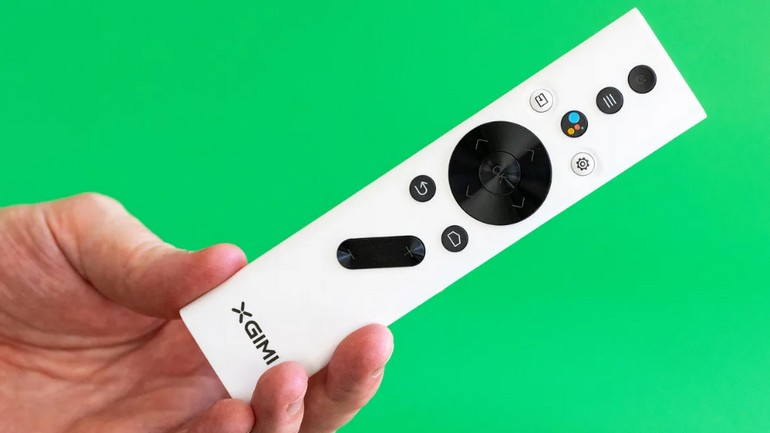 Advertised brightness appears to be largely overstated. While the manufacturer promises 900, we measured about 284 lumens. It’s not bad, but it’s a far cry from Xgimi’s claims. Either way, it’s one of the brightest portable projectors we’ve tested, though it’s a far cry from more affordable battery-free projectors. So it all depends on how you plan to use Halo Plus. If battery life is important, this projector is bright enough for its category. If you just want something small and not too expensive, there are other brighter and more capable options. 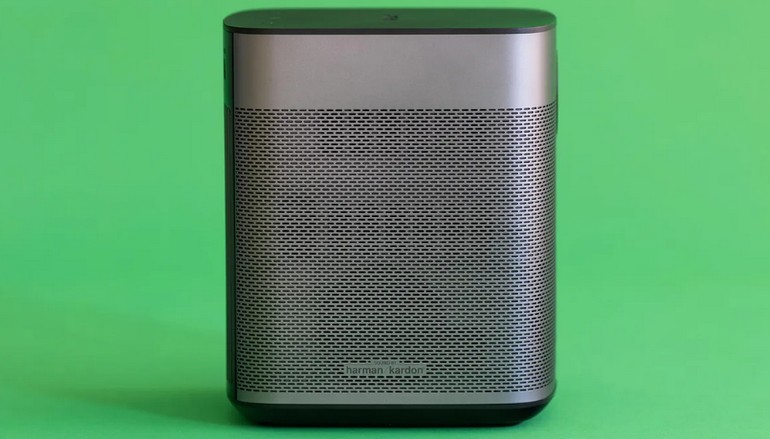 Claimed battery life is 2.5 hours. Using a battery cuts the light intensity in half, which is typical of portable battery powered projectors.

There’s one other quirk we have to mention because it drove us crazy. When Halo+ is turned off, there are two options available to us: standby mode and full shutdown. If you select full shutdown to prevent battery drain, the only way to restart the projector is to press the power button… twice. There is a small warning about this before the screen goes black. This design is counter-intuitive. We don’t know of any other product that requires you to press the power button twice to activate.

On the back there are fairly standard connections for a projector of this size: HDMI and USB, plus an analog headphone output. The native integration of Android TV is a huge advantage in terms of ease of use. This means you have all the major streaming apps and the full versions of those apps. Many portable projectors use watered-down versions, which make them more of a pain to use.

Halo+ has two 5W speakers from Harman Kardon. They give quite a high volume for their size. 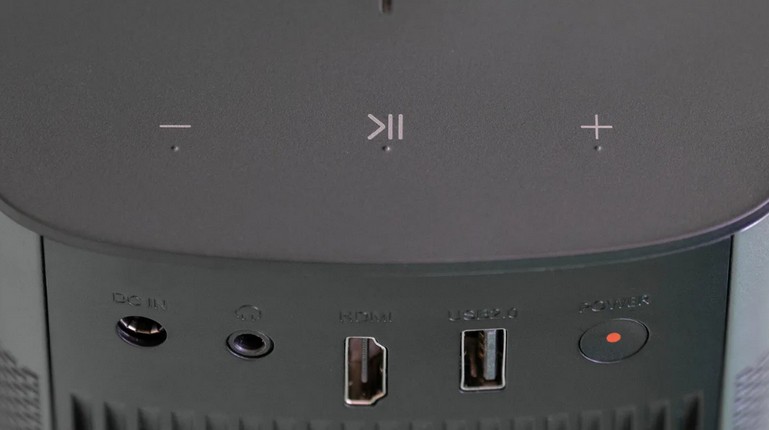 We pitted the Halo+ against two similar portable projectors: the Anker Nebular Mars II Pro and the BenQ GS50. The Anker Nebular Mars II Pro offers nearly the same specs but costs $550 more. The BenQ is bigger than the Halo+, but both are still easily considered portable. The price is 799 €. We hooked them up to a home theater amplifier and connected them side-by-side to a 102-inch projection screen.

The Anker’s image looked a bit washed out compared to the Xgimi, although their contrast ratios are almost identical. This is likely due to the lack of picture adjustment controls on the Mars II Pro. The fixed brightness setting is too high, which removes shadows and gives the image a washed-out look. On its own, it’s not that bright, and the picture is still good overall. But compared to Xgimi, it lags behind. 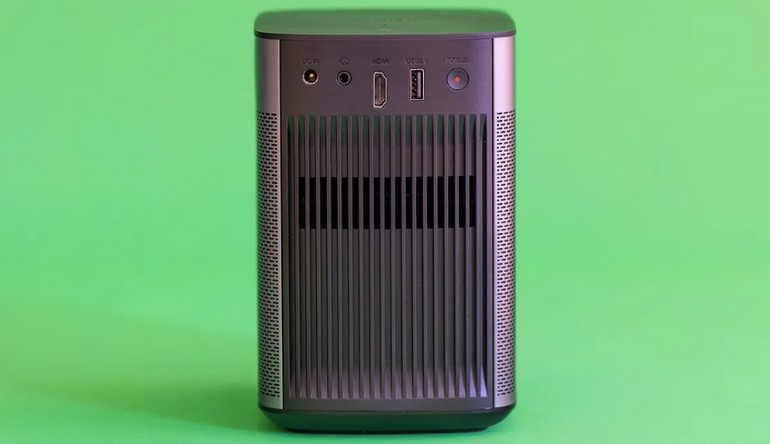 It’s worth noting that the Mars II Pro displays at 720p versus 1080p for the BenQ and Xgimi, but that’s not as significant as one might think. Sure, the other two are sharper, but the Anker cuts a nice figure. Overall, if you want something almost as good but want to save a little money, the Mars II Pro is the best choice.

The GS50 fishes in brightness. The Xgimi is almost twice as bright as the BenQ. But at 100 inches, both still fall short of “true” home theater projectors. On the other hand, if you project an image the size of a TV, they are more impressive. Xgimi is really brighter. Its contrast ratio is also better, around 50%. This, combined with additional light, results in a more attractive image.

However, BenQ produces better colors. Grass, sky, skin tones, everything looks more natural. Xgimi’s colors are not that realistic. However, while color is an important part of overall image quality, it simply can’t compete with the Xgimi’s better brightness and contrast ratio in this case.

As for Xiaomi’s Mi Smart Projector 2, we measured half the same lumens with BenQ as with Xgimi and Anker. Since it’s practically the same price as the Xgimi but lacks the battery, the latter clearly wins. 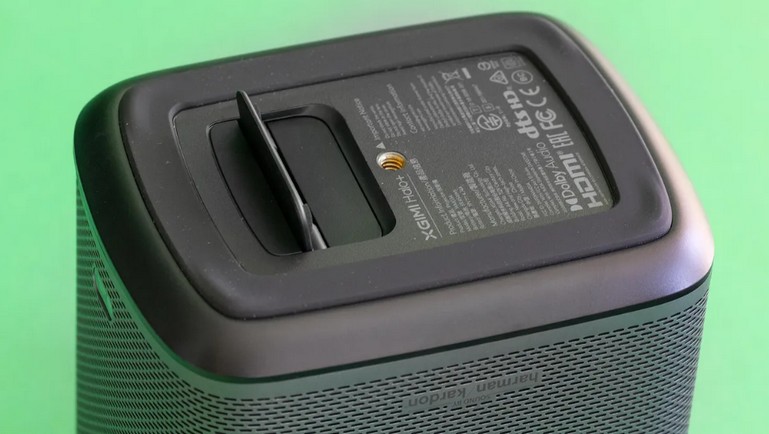 Halo+ has a sleek, simple design. Suit outside, athlete inside. It surpasses its most direct competitors. However, as with all these portable projectors, you really need to think about what you’ll be using it for. Is having a battery an essential asset for you? If you’re not going to use the battery, a traditional home theater projector like the BenQ HT2050A is better than the Halo Plus for the same price.

On the other hand, if you’ll be using it regularly away from power outlets, the Halo Plus delivers a brighter and generally better image than several other portable projectors we’ve tested. The Anker Mars II Pro is more affordable, but it lacks the contrast, detail, and ease of use of a full Android TV interface. The BenQ GS50 has a more original design, but it can’t compete with the Xgimi in terms of brightness. So if you’re going to use it unplugged and the relatively high price tag doesn’t put you off, the Xgimi Halo+ is a great choice.