Survey conducted online by Harris Interactive October 25-27, 2022. The sample represents 1,051 French people aged 18 and over. The quota method and adjustment are applied to the following variables: sex, age, socio-professional category and region of the interviewee.

A steady erosion of trust in the executive branch

Minus 1 and Minus 3. These are the confidence changes of Emmanuel Macron (45%) and Elisabeth Borne (42%). They not only declined, not only continued the movement seen at the end of September, but also set a record since the presidential election. The poll, which was conducted after the impeachment vote and in part after the President’s interview with Carolyn Ruy, shows no increase in confidence among voters on the right side of the political spectrum (47%, -10).

On the side of the government, the dynamics are quite positive, the confidence level of all ministers is increasing. Bruno Le Maire (40%, =), Olivier Veran (37%, =), Gabriel Attal (35%, +1) and Gerald Darmanin (35%, +1) remain the ministers with the highest level of trust. Pap Ndiaye, who spoke in recent weeks on the issue of secularism in schools, had the biggest increase among members of the government this month, gaining 4 trusts (29%). Interior Minister Gerald Darmanin has been publicly exposed in recent weeks. Let’s look at its trust structure. Apart from gender, sociological characteristics have little effect: although men are more positive than women (32% vs. 39%), older people are not more positive than younger people (37% vs. 38% of those under 24). Neither those aged 65 and over nor seniors (37%) are more likely than the working class (34%). As expected, political variables emerge more clearly: 24% of LFI supporters, 70% of those close to the Ensemble and 52% of Republicans and 28% of RN. Gerald Darmanin therefore does not suffer from the point of view of Lola’s murder. And its structure has not been profoundly changed compared to what was mentioned last month.

As for the political figures tested in our barometer, we also observe positive dynamics. As in previous months, Edouard Philippe (42%, +2) is seen as the most trusted figure by the French. The former Prime Minister still enjoys the trust of the majority of Ensemble supporters, the political family seen as the most popular political figure (79%, +3). For the fifth month in a row Marine Le Pen ranks second among the political figures most trusted by the French (33%, -3). He logically scores very well in his political family (90%, -1). When recently voting on a motion of censure tabled by NUPES in the National Assembly, the RN MP saw a slight increase in his popularity among PS sympathizers (18%, +5) and EELV (12%, +3), as well as LR sympathizers ( 44%, + 8). On the other side of the political spectrum Jean-Luc Mélenchon advances 4 places (27%) without seeing that his confidence in him was thwarted by the surprise vote of the RN deputies of the protest motion brought up by NUPES. Finally, let’s note that Nicolas Sarkozy, whose interview with JDD was clearly leaked, advanced by 3 points (31%) and still enjoys a comfortable trust among LR sympathizers (66%).

Six months after the presidential elections, we see a decrease in trust in the executive power. Interestingly, more than five years after his arrival at the Elysée, Emmanuel Macron’s spontaneous appeals have changed little. If we compare the statements of October 2017 with the statements of this month, we can only observe the continuity of certain terms in which the “President of the Rich” is in the foreground. If five years later the reference to the term “banker” is less clear, let us observe the presence of the term “liar” now. This is a less specific word often used by politicians. Whatever they are. 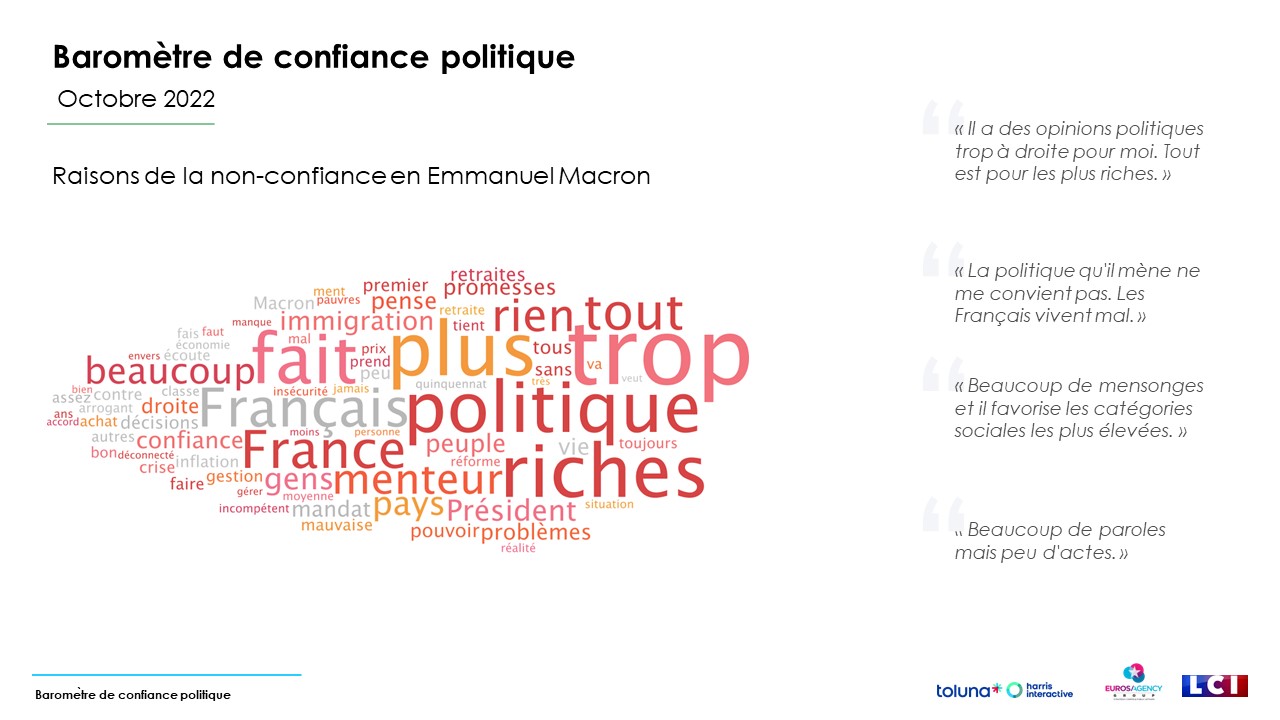