“When you think of Marlboro red, you think of Barbes, Subway, and illegal cigarettes in white and red packaging. We imagine social events persistently challenging passers-by. But it is more a means of living, a means of livelihood for marginalized people, illegal immigrants, men, women, children who come to France under very difficult conditions…”

A sculptural installation, staging a character representing the social landscape of the Barbes district of Paris in the 18th arrondissement. A man depicted in the guise of an artist paints a basic boat used by illegal immigrants from all over Africa. The makeshift raft sinks. There are only remnants of what these people were on the ship. Clothing. Water. Doudou… A man who pulls a boat up to his arm; the sole survivor of this journey, both individually unique and overall unnamed banality; on his shoulders he carries a backpack with cigarette packs symbolizing his future survival on the other side. In front of his face, a cloud of golden butterflies rushes towards him. An illusion masked by a blinding dream. It is planned to install the work secretly at the foot of the Barbes metro station.

The purpose of this installation is to gather the reactions of all the interesting people talked about in the work, namely the clandestine circulation of cigarettes and by extension the clandestine migration from North Africa to Europe and the resulting clandestine migration. phenomenon. Street vendors, policemen, passers-by, neighborhood residents… My work aims to be realistic, it inhabits the place of life and disappears into the urban space, its most anonymous reflection.

I made this sculpt in 2021, doing technical research to compress the realism of my character as much as possible under my features. I am from Algeria, I had the opportunity to come to France to continue my studies at the School of Fine Arts in Bourges. Unfortunately, not everyone is so lucky, and that’s why this topic resonates with me in particular. From the day I arrived here, I was able to secretly go down to France and meet many people from the same country as me. They experienced the crossing of the Mediterranean Sea by boat. Conditions. Fear. Removal of the root.

Sculpture on July 13, 2022 after a year of preparation, reflection, realization, technical and financial constraints Marlboro Bled finally he goes out into the street, escapes his architect and finds his original place, the place where it all began.
The street is where the idea comes from, the reason for its realization. Indifference to this desperate act, which represents the illegal crossing of the Mediterranean by illegal migrants in a country that is talking about these people. A male statue, represented in the artist’s guise, draws the main boat, similar to the boats used by illegal migrants from all over Africa.

This July 13, 2022, the artist Belkacem Gouasmi decides to install the work underfoot.
From Barbes subway. Since it’s unofficial, installation is quick, which is the goal
maintaining the idea of ​​privacy. It’s 11 o’clock when the statue leaves the truck,
that after a few minutes he went up and the artist humbly stepped away from him to deliver him
To passersby in Barbes district. There is a camera nearby to shoot
the reactions of people who cross his path.

Early observers are shy or even careless. They observe from a distance, they really stand still. don’t you dare approach. Then come the braver ones who stand at a distance, observe, try to touch the statue, look around, silently questioning themselves. Finally, there were people with whom the dialogue was established. First, they are presented among themselves, then with the artist’s friends around the installation, and then sometimes with the artist himself. The first and most common reflection is the realism of sculpture. Most people wonder if he is a real person, some touch him to check, to ask. One man even surprised the boat by putting a coin in it. It amazes the artist who transfers his characteristics to the sculpture that he has forgotten the realism of the sculpture from seeing it develop before his eyes throughout its development. 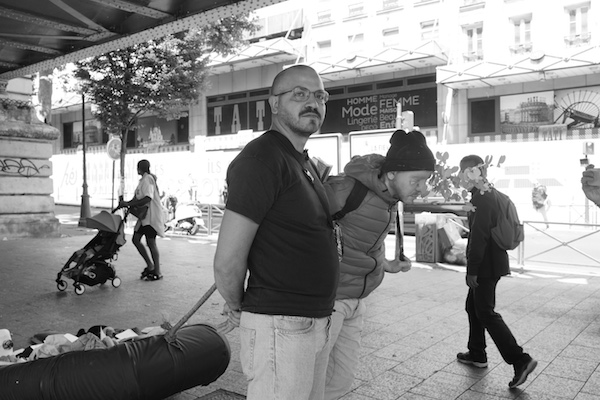 Then there are various discussions, there are people to whom the sculpture should be explained, and there are more people who directly grasp its meaning and rationale. They are mostly affected, affected, even angry because many have experienced or observed it. Some engage in a political voice, while others engage in just a human way. Some, more rarely, testify. It is they, these people, that the artist wants to touch, reach out, observe. Because Belkacem’s observation is simple: the actors of this form of migration are mostly indifferent to their own tragedies, trivializing it despite the fact that they are all approaching death. Nevertheless, one man testifies: “It’s sad, frankly, sad, especially for someone who’s already tried it, I know what it is, you put it in. Don’t throw yourself, brother, welcome, Europe is for everyone, but don’t throw yourself into this situation, into the boat, into the lifeboat.